Wildfires can produce significant water quality changes that may impact fish and other aquatic organisms, drinking water supplies and wastewater treatment systems. These impacts are cumulative as a result of pollutants mobilized by the fire, chemicals used to fight the fire, and the post-fire response of the landscape. Responses include both immediate / short-term responses as well as longer term (decade or more) impacts.

One of the first and greatest impacts of wildfire is a significant increase in stormwater runoff which can lead to considerable downstream flooding. Runoff is magnified due to the loss of vegetation and the development of hydrophobic soils during intense wildfires. Rain that falls in a wildfire-impacted watershed cannot easily infiltrate into the ground because (1) the loss of vegetation does not slow precipitation down once it hits the landscape, and (2) the development of hydrophobic soils during a wildfire physically repels any precipitation and does not allow infiltration into the ground. Increases in streamflow following a fire can result in little to substantial effects on the physical, chemical, and biological quality of the water in streams, rivers, and lakes. The magnitude of these effects is largely dependent on the size, intensity, and severity of the fire, and on the condition (i.e., healthy or poor) of the watershed at the time of burning.

As mentioned previously, wildfires can affect the physical, chemical, and biological quality of streams, rivers, and lakes. After a fire, increased runoff provides the pathway for the transport of chemical-laden sediment to surface water, which may have substantial water quality impacts. The primary water quality concerns after a wildfire are:

1. The introduction of debris and sediment, including black ash, from burned vegetation. In the immediate period after the fire this runoff can result in fish kills by robbing the streams of oxygen through decomposition and by physically injuring the gills of fish. It can be detrimental to other aquatic life by smothering habitat upon which these organisms depend. Furthermore, increased sediment loading can drastically impact lake and reservoir holding capacities as well as the functionality of the outlet works by filling the system with sediment and debris.

2. The increase of nitrate and other plant nutrients. Burning vegetation releases nutrients contained within plants including nitrate, ammonia and phosphate. At high concentrations ammonia can be toxic to fish and other aquatic life. Elevated nutrient concentrations, especially nitrate, can be a concern if downstream uses include a public drinking water supply. Increases in nitrogen and phosphorous concentrations also may lead to algal blooms resulting in extreme daily fluctuations in oxygen or oxygen depletion as plant photosynthesis, respiration, and decomposition intensify. Anaerobic conditions (i.e., lack of oxygen) stress aquatic organisms and can alter a wide range of chemical equilibria, which may mobilize certain toxic pollutants.

3. The introduction of radionuclides and heavy metals from ash, soils, and geologic sources within the burned area.  Gross alpha activity increases in stormwater runoff are strongly correlated with the amount of suspended sediment carried in stormwater. Post-fire flash floods contain extremely high levels of suspended sediment and subsequently have very high levels of gross alpha activity. Following the Cerro Grande Fire in 2000 the concentrations of several metals (e.g., copper, aluminum, barium, manganese, and zinc) increased and in some cases exceeded state water quality criteria. As the forest and soils recovered, these concentrations decreased and by 2010 these waters no longer exceeded state water quality criteria.

4. The introduction of fire retardant chemicals into waterbodies that can reach levels toxic to aquatic organisms. Fire retardants typically contain large amounts of nitrogen as ammonia, and they can cause water quality problems when fire-suppressing drops are made close to streams.

The magnitude of the effects of fire on water quality is primarily driven by fire severity (how much of the fuel is consumed) and fire intensity (how hot the fire burned) coupled with subsequent seasonal weather events (e.g., monsoon rainfall). In other words, the more severe the fire, the greater the amount of fuel consumed, the more nutrients released, and the more susceptible the watershed is to erosion of soil and nutrients into the stream, which could negatively impact water quality. In addition, fire intensity affects the formation of hydrophobic soils that repel water and increase the probability of stormwater runoff in the watershed. Another important determinant of the magnitude of the effects of fire on water quality is the slope of the burned area; steeper slopes are more likely to result in greater runoff and transport of chemicals and sediment to streams, rivers, or lakes in the watershed.

The Little Bear Fire was a wildfire that burned 44,330 acres and 254 buildings, making it the most destructive of human structures wildfire in the state’s history. The previously most destructive fire was the 2001 Cerro Grande Fire. The fire began on June 4th, 2012 from a lightning strike and quickly grew out of control due to dry windy conditions. 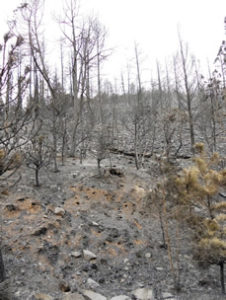 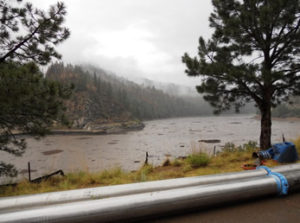 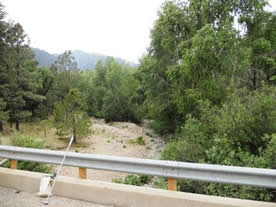 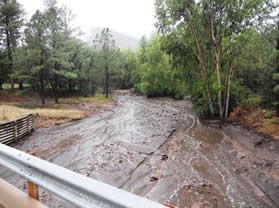 The fire started as two separate fires, the Whitewater Fire which was detected on May 16th, 2012 and the smaller Baldy Fire that started earlier on May 9th, both from lightning strikes. The fires merged on the 24th of May. The fire has burned more than a dozen residences, caused the evacuation of several small towns, and forced the closure of the Gila Cliff Dwellings National Monument and The Catwalk recreation area above Glenwood, New Mexico. Rain showers in mid-July helped firefighters reach 95% containment by July 23, 2012.  By then, the fire had burned more than 297,845 acres (465.383 sq. mi.; 120,534 ha) in the Gila National Forest. This well surpassed the Las Conchas Fire of 2011, thus making Whitewater-Bald the largest wildfire in New Mexico state history. The fire burned mostly within the Gila Wilderness, which includes the fire’s namesake, Whitewater Baldy Mountain 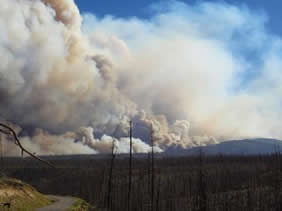 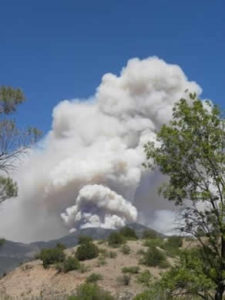 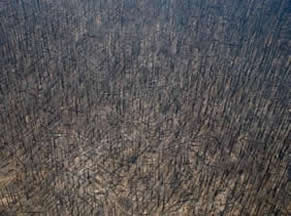 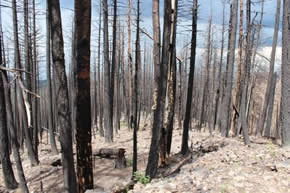 The Las Conchas Fire started in Santa Fe National Forest and burned more than 150,000 acres, threatening Los Alamos National Laboratory and the town of Los Alamos. After five days of burning, it became the largest wildfire in New Mexico state history at the time, though it was surpassed the following year by the Whitewater-Baldy Complex Fire.  The fire started on June 26th, 2011, at approximately 1:00 pm Mountain Daylight Time when a tree fell on a power line. On the first day, driven by strong and unpredictable winds, the fire burned 43,000 acres—a rate of about an acre per second.  By June 30th, the burned area had increased to over 103,000 acres (161 sq. mi.), making it the largest fire in New Mexico history (the previous largest was the 2003 Dry Lakes Fire, which burned over 94,000 acres).  The fire was 100% contained on August 3rd and efforts were immediately made for recovery of the burned areas.  During it’s life, the fire threatened the village of Cochiti to the South, lands owned and held sacred by the Santa Clara Pueblo to the North, and the town of Los Alamos with its National Laboratory to the East.  Sixteen thousand acres of Santa Clara Pueblo burned in the fire, much of it in the pueblo’s watershed. Forty-five percent of the watershed was burned, leading to fears of flooding. The pueblo responded by preparing for floods. Currently, much of the burned area is still at risk for dangerous flash floods.  Destructive flooding occurred in the burned region as the result of a monsoon rainstorm on August 21, 2011 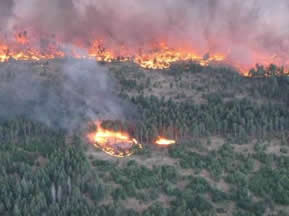 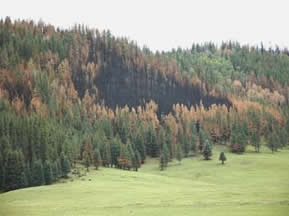 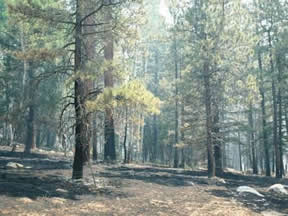 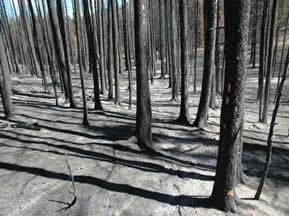 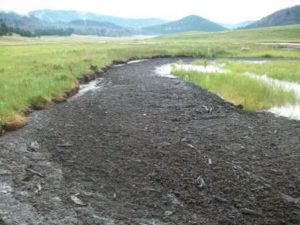